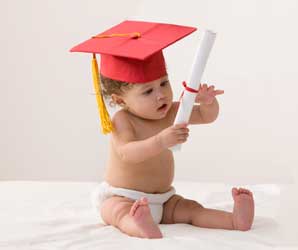 Education levels are largely dependent on socioeconomic and environmental factors, but genetics should not be discounted, say researchers. A 250-strong international team, including researchers from UQ’s Queensland Brain Institute, have identified 74 areas of DNA associated with how long you stick it out at school.

The researchers scrutinized the DNA of more than 290,000 people, and found that the association is clear, but the cause is not, and noted that the 74 areas collectively account for less than 0.5 per cent of the differences in educational attainment. The regions, they observed, seem to be particularly involved in foetal brain development.

Researchers are also excited by overlap of many of these variants with cognitive performance and neuropsychiatric diseases, such as Alzheimer’s disease, bipolar disorder, and schizophrenia.

"These tiny genetic differences may ultimately help us understand why some people are more susceptible to early cognitive decline than others," said UQ’s Peter Visscher in a press release.