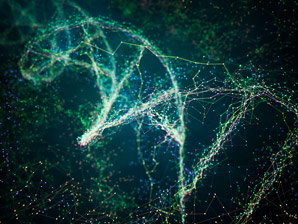 A large-scale study of spatial contacts within the genomes of 27 human cell types and tissues has revealed the target genes of some 70,000 putative regulatory elements and more than 27,000 DNA variants linked to physiological traits and disease.

This ‘interactome’ map, generated by a team co-led by KAIST scientists, offers a window into the three-dimensional genomic architecture that shapes gene regulation throughout the human body — information that could lead to a better understanding of disease and provide leads for new treatment strategies.

Using a technique called capture Hi-C, the team detected regions of DNA that physically interact with gene-activating ‘promoter’ domains across a wide range of human cells and tissues. By first looking at well-annotated promoters, the researchers could infer the targets of other similar elements, allowing them to create a compendium of DNA interactions for future studies of regulatory pathways that go awry in various disease settings.