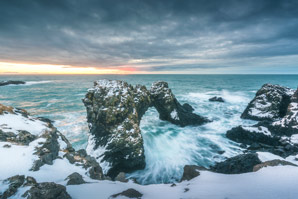 A new model provides clearer estimates of how much global warming will accelerate the rate at which the Arctic coast will crumble into the sea this century.

Arctic coasts account for about one third of the world’s coastline. Rising temperatures make them more vulnerable to erosion through thawing of permafrost and reducing the time that ice protects the coast from waves.

Now, a team led by researchers from the University of Hamburg in Germany has developed a semi-empirical model that can make projections for the whole Arctic coast.

The model predicts that erosion of the Arctic coast will increase by 1.8 to 2.9 times by the end of the century, depending on how much carbon is emitted.