Researchers say more needs to be done to correct past injustices. 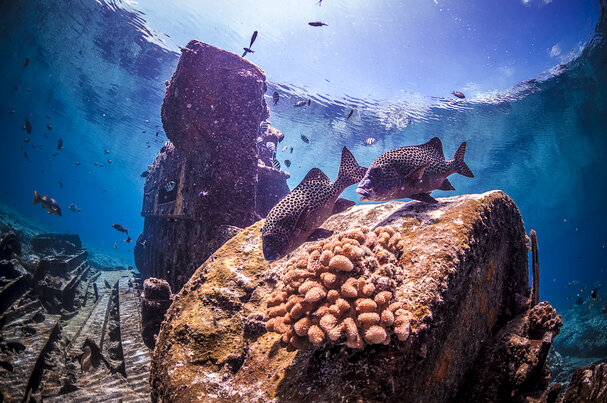 After enduring “parachute science” for decades, researchers in countries known for their coral reefs and mineral riches now have data quantifying just how pervasive the practice has been.

Two recent analyses have shown that the bulk of studies conducted on African Earth sciences and coral reef biodiversity in Indonesia and the Philippines list not a single host-nation scientist.

As described by scientists who have been subjected to the practice, it occurs when foreign researchers swoop in, disregard people with on-ground experience and give little to no credit to local collaborators on published works. When the visitors depart, they are likely to take data with them, and perhaps biological samples, as well as career prospects denied to local researchers.

In 50 years of coral reef biodiversity research, scientists from high-income nations – some of which have no reefs of their own – have dominated publications.

The new Current Biology study also found that around 40% of papers involving fieldwork conducted in Indonesia and the Philippines, two countries with coastlines fringed by coral reefs, listed no host-nation scientists at all.

Visiting researchers may have good intentions, says marine scientist and co-author Wilfredo Licuanan at De La Salle University in the Philippines. But in their ignorance of local laws and lacking awareness of localized differences in coral reef ecology between tropical regions, they have done more harm to reefs in the Philippines than good, he says.

“The legacy of parachute science in a lower-income country can, and does, make the work of local scientists like myself more difficult,” says Licuanan.

Sri Lankan marine scientist Asha de Vos, who was not involved in the Current Biology study, says the degree of bias it highlights, against researchers with local knowledge, is startling and problematic on many levels.

“For our conservation efforts to be successful, diversity, inclusion and equity are not options but absolute necessities,” says de Vos, founder of Oceanswell, a conservation education and research organization.

If research were more inclusive, and not driven by outsider motives but on the ground needs, then scientists from marginalized countries would feel represented and empowered to pursue, design and conduct research "in their own backyards" long-term, improving local conservation outcomes in the process, de Vos says.

Happening in many fields

The problem looms over large over Africa, too. A similar analysis of Earth sciences journals, published in Earth-Science Reviews found that over the past five decades, the relative contribution of African scientists to international literature – on African geoscience – was on par with scientists from the Netherlands, at a stagnant 2.3%.

Only 30% of papers published about African earth sciences in the field’s top 21 high-impact journals between 1973 and 2017 listed an African author – suggesting that the bulk of geoscience research during this period involved no local scientists.

The analysis, which recognizes the lack of government research expenditure in Africa as a factor which may contribute to the under-representation of local researchers, has created a stir, including amongst geologists, says co-author Warwick Hastie, a geologist at University of KwaZulu-Natal in South Africa.

People are now realizing that parachute science is “happening in all sorts of other fields,” he says.

To combat poor research practices, he says journals and funders could review funding or reject papers when research clearly does not involve or benefit local scientists.

At least one journal, The Lancet Global Health, has taken a stance against submissions that appear to make use of local infrastructure, personnel and patients without recognising contributions from host-nation researchers.

Another, Cell Press journals, has introduced an inclusion and diversity statement giving authors the opportunity to highlight efforts they took in their work to avoid parachute science.

Soil scientists and ecologists along with environmental engineers have also spoken out to condemn the practice, penning papers in the past year.

As for genomics research, guidelines set in 2018 by the Human Heredity and Health in Africa Initiative, a health-genomics consortium of Africa-based researchers, along with a framework published the same year by geneticists in the US on the ethical engagement of Indigenous communities, have set a benchmark for best practice.

These guidelines “should be widely adopted, particularly as we still see so much evidence of either ongoing helicopter research in the field or damages that emanate from such work,” says population geneticist Alicia Martin at the Broad Institute. True partnerships require a lot of trust which takes time and work to build, she adds.

Mathilde Poyet of MIT says scientists need to play their part to correct imbalances in knowledge and authorship, and to prioritise research relevant to local populations, particularly in developing fields such as microbiome research.

“First and foremost, it’s a matter of equity. Science should not be an ‘extractive’ endeavour,” says Poyet who co-authored a statement from the Global Microbiome Conservancy on leaving parachute science behind.

She says peer reviewers and journal editors have a responsibility to make sure that research permits have been obtained and are clearly identified in a manuscript before a paper is accepted for publication. Less than a quarter of all coral reef science papers published in the past 50 years showed that they had applied for the necessary permit or exemption, according to the Current Biology study.

But the study also suggests the tide is slowly turning on parachute science, at least in the Philippines in the past two decades, when scientists studying abroad returned home to lead their own research programs and supervise students. “That’s when you start seeing all-Filipino publications,” Licuanan says.

Ecologist Georgia Ward-Fear of Macquarie University in Australia says there is a push in her field – where researchers from the global south are noticeably underrepresented in leading journals – towards more inclusive, collaborative science.

Still, she says researchers need to take the initiative to advocate for inclusive authorship for Indigenous and First Nations contributors with unique skills who may prefer to be identified on papers by their cultural group, and not by name.

“The [authorship] protocol needs to change with the times. We need to acknowledge the diversity of contributions that can be made from people from different backgrounds,” Ward-Fear says.

Making the case for more equitable and inclusive research and authorship practices should not, however, fall to Indigenous researchers, who by and large have overcome numerous obstacles in their own careers and carry the pain of past injustices, say Indigenous scientists who wrote about their experiences for Nature, including Anishinaabe academic Deborah McGregor, from Whitefish River First Nation in Canada.

Rather, it’s the people with power who need to do the work to understand Indigenous perspectives, including the history and ongoing impacts of colonization, McGregor wrote, to ensure that Indigenous people and their traditional knowledge are not overlooked.

“Often, however, Indigenous concerns are an afterthought,” she says.