How a surprise budget boost could reshape Spanish science

Researchers hope a 60% increase in funds can revitalize their austerity-hit scientific system. 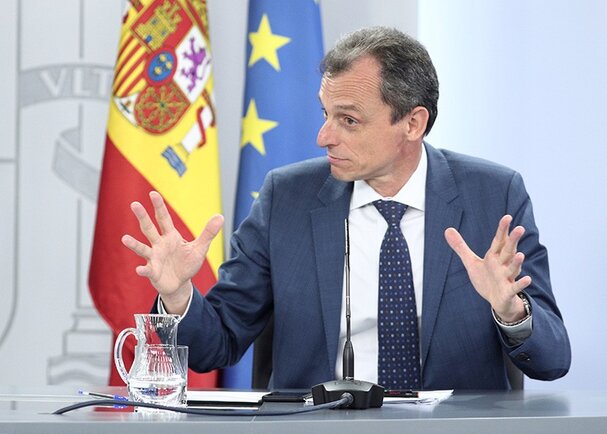 The Spanish Science Minister, Pedro Duque, at a press conference

Scientists in Spain are cautiously celebrating a remarkable boost to their research budget, which they hope could reverse some of the damage done by a decade of deep cuts. On 27 October, the Spanish government presented Parliament with its 2021 budget, which increases the science ministry’s funds by nearly 60% compared with 2020.

If approved, the boost would raise the ministry’s budget to €3.2 billion (US$3.8 billion) — the most ever earmarked for science in Spain. But some researchers fear that the windfall, which comes courtesy of a European Commission COVID-19 recovery fund, could be short-lived.

“My eyes almost popped out,” says Amaya Moro-Martín, a researcher at the Space Telescope Science Institute in Baltimore, Maryland, who is originally from Spain and in 2012 co-led a major protest of scientists against the country’s austerity measures. “Spain has systematically spent in science in good times and cut funds when the economy went bad,” says Moro. A break in this trend is very good news, she says.

Much of the increase comes from the European Commission’s NextGenerationEU programme for member states hit hardest by the COVID-19 pandemic. Spain will receive €140 billion from the EU over six years, half of which are grants. For 2021, he Spanish government has devoted €1.1 billion of EU money to the science ministry, and added €2.1 billion from its own coffers. Some of the European money will also go to research through other ministries’ budgets.

“The money is great news,” says Jorge Barrero, director-general of the Cotec Foundation for Innovation in Madrid, which publishes a yearly report on research and innovation in Spain. “But it’s a bit sad that a virus has saved science, while science should have saved us from the virus.”

Rebuilding the system Many researchers hope that the cash will help to rebuild parts of the research system that have suffered since the 2008 financial crisis. After years of sustained increases, leading to a 2009 high of €2.6 billion, austerity slashed the science ministry’s money to almost half by 2013. When the economy recovered, investment in science didn’t follow.

Cuts shrank the number of researchers in Spain from 135,000 in 2010 to 122,000 in 2015; many early-career scientists left research. As a result, Spain has lost a generation of scientists, says Barrero, and many researchers have become disenchanted.

The money should help some cash-strapped institutes to renew their facilities and hire people. One winner is the Institute of Astrophysics of the Canary Islands (IAC) in Santa Cruz de Tenerife, which expects its budget to almost double to €19.2 million. “We plan to modernize laboratories and create a new centre of advanced optical systems,” says IAC director Rafael Rebolo. “It has been 12 or 13 years since we have started asking for this.”

But more weight could have been put on funds for competitive grants, says Luís Serrano, a member of the coordination board of SOMMa, an alliance of research centres in Spain. The State Research Agency (AEI), Spain’s main granting body, is set to receive a 29% increase — bringing its budget to €825 million. Serrano says its funds should have been doubled, to return to its historic high of 2007.

Scientists including Serrano are also concerned that the increased funding might not be sustained after the European money runs out. “If they give you money for 18 months, you will hire people and then sack them because the funding is not maintained,” says Serrano.

Still, say researchers, the boost reflects favourably on the administration of the socialist-party Prime Minister Pedro Sánchez, who leads a left-wing coalition government. When he came to power in 2018, he re-established the science ministry, which his conservative predecessor had removed. Sánchez appointed Pedro Duque, a Spanish astronaut, to lead the ministry.

Duque says that he plans for the science budget to increase yearly, and to eventually come completely from Spain. He hopes the government will be spending 1.25% of its gross domestic product (GDP) on science by 2030. With private funds, this should add up to 3% of GDP being invested in science, he says — a European target for spending on research and development.

Duque is also finishing a proposal to create tenure-track contracts for scientists — another long-held wish of the scientific community. To make the Spanish science and technology system attractive, researchers must be able to trust that their careers will follow a predictable path, says Cristina Murcia García, president of CERFA, the Society of Spanish Researchers in Germany.

The budget must now pass through a Parliament with no majority, but Duque is confident it will be approved, because a budget must be passed if the government is to spend the EU money. Media reports say that the government aims to approve the budget before the Catalan regional elections, expected to take place in February 2021.