Despite progress, many physical scientists from sexual and gender minorities experience exclusion or harassment at work, finds UK survey. 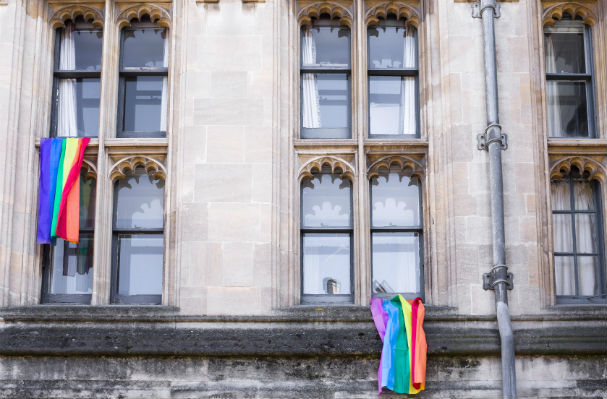 Nearly one-third of physical scientists from sexual and gender minorities in the United Kingdom have considered leaving their jobs because of their workplace climate, suggests a survey.

And 18% who are lesbian, gay, bisexual, transgender or from other sexual and gender minorities (LGBT+) said they had experienced harassment, bullying or exclusionary behaviour in the workplace.

That figure rises to 32% for transgender people and those who don’t identify as either male or female (non-binary). Transgender and non-binary scientists were overall more likely than other the groups to describe challenges in their work environment, and women generally reported more negative experiences than men.

The findings come from a survey published on 26 June 2019 by British scientific societies that spoke to more than 600 people working in academia, industry and schools - the largest such study worldwide in the physical sciences (see ‘LGTB+ experiences’).

Most respondents self-identified as LGBT+, although the survey also included a minority of heterosexual, cisgender people - those who identify with the gender they were assigned at birth.

Language - such as derogatory use of the word gay - harmful humour and people using the wrong pronouns were some of the factors that created an unwelcoming climate.

It’s “all the tiny things that, over time, build up to create a culture that isn’t particularly welcoming”, says Jennifer Dyer, head of diversity at the London-based Institute of Physics, which conducted the survey with the Royal Astronomical Society and the Royal Society of Chemistry.

Overall, three-quarters of LGBT+ respondents reported feeling comfortable at work and almost 70% said they thought the situation was improving. But this masks “an underlying picture”, in which almost half agreed there was a lack of awareness of LGBT+ issues at work, says Dyer.

The societies say that despite a wealth of evidence that diversity benefits science, workplaces still have much to do to cultivate inclusive environments - LGBT+ people are thought to be under-represented in science overall.

The results echo those of a survey published by the American Physical Society (APS) in 2016. One difference is that just 4% of UK respondents who said they were not out at work felt “very uncomfortable”, compared with 46% of the parallel group in the US survey.

That’s striking, says Elena Long, a nuclear physicist and an architect of the APS survey. One reason for the disparity might be that the UK survey included scientists working in industry, which could be further ahead on some LGBT+ issues than academia, she suggests.

The report brings much-needed data to an area in which research is scarce, and comes as the academic community grapples with endemic discrimination against and exclusion of minority communities.

The survey is crucial as a benchmark against which to monitor progress, says astrophysicist Alfredo Carpineti, who co-founded UK campaign organization Pride in STEM (science, technology, engineering and mathematics) in 2016.

The group helped to set up international LGBTSTEM Day to raise awareness of diversity and inclusion in science; the event will be celebrated for the second time on 5 July.

There might be a few reasons that scientists face more challenges than those in other sectors, the report notes. One is the international nature of science — a successful career often means interacting with people in cultures that are less inclusive of LGBT+ people.

Scientists reported feeling less safe being open about their gender or sexual identity when working in these cultures, and in some cases felt they might be expected to “return to the closet” for the sake of a smooth collaboration. It is essential that institutions reflect the international nature of science in their LGBT+ policies, says the report.

The culture in scientific workplaces also rarely promotes talking about personal lives, which can make it harder for LGBT+ scientists to come out if they want to. The report suggests social spaces, such as coffee mornings and lunches, could encourage staff to have casual conversations.

Science-specific training that effectively supports LGBT+ staff and covers inclusive language is also essential, says the report. “If you think you can just skim through [training] or put a rainbow flag up one day a year, you’ve not done your job well enough,” says Carpineti.

And although the study did not examine race and disability, being a member of multiple minority groups compounds issues, he says, and training needs to cover this as well.

Among other recommendations, the report suggests that people put their pronouns in e-mail signatures and on name badges at events. This normalizes the idea that not everybody is a he or a she, says Dyer.

Carpineti says one comment in the report encapsulated the challenges that LGBT+ initiatives face. Made by one of the heterosexual, cisgender men surveyed, it called the questions “childish” and rejected the need to be aware of issues around sexual orientation and gender identity in a professional setting.

It mirrors “pretty much every troll and hate message we get at Pride in STEM” and comes from a privileged position that does not understand that science is not divorced from the people who do it, says Carpineti.

“You cannot just pretend that work is just work: that leads to quite poor science.” It’s the attitude we need to challenge, he says.

My CV is gender biased. Here’s what I plan to do about it

The Nobel gender gap is worse than you think