More than one in five physicists from sexual and gender minorities in the United States report having been excluded, intimidated or harassed at work in the past year because of their gender or sexual identity or expression, a survey has found.

According to the American Physical Society (APS) report LGBT Climate in Physics, published on 15 March, transgender physicists and physics students faced the most hostile working environment, with almost half of the 37 surveyed reporting having experienced exclusionary and harassing treatment in the past year. 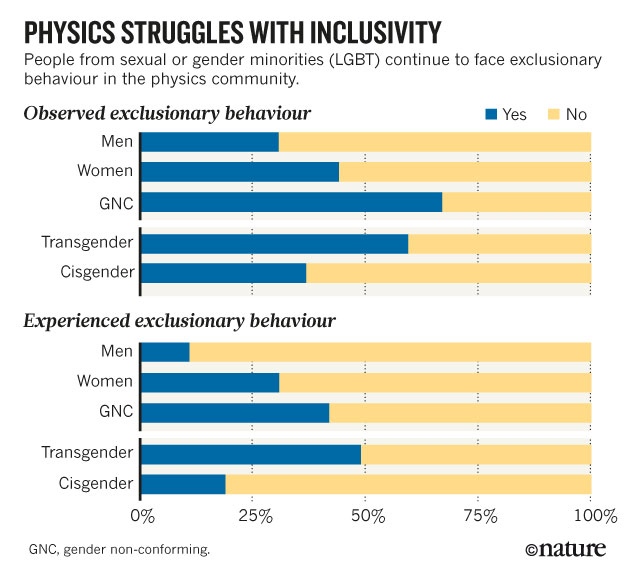 Problems faced by transgender physicists included colleagues who failed to respect their gender identity — for example, by using the wrong name or pronoun to refer to them — and a lack of toilet facilities that they felt comfortable and safe in using.

The findings come from a survey that asked 324 staff and students — most of whom were in academia — who self-identify as lesbian, gay, bisexual, transgender, queer, questioning or intersex or another sexual or gender minority (LGBT), about their experiences.

The report suggests that even though a survey published last year suggested that scientists are more open about their sexual and gender identities than are others in the US workforce, some LGBT academics continue to face sexual harassment, homophobic comments, exclusion, stereotyping and expectations of incompetence.

Experiences were tougher for women, the report suggests: they experienced harassment, intimidation and exclusionary behaviour at three times the rate of men. And although the survey was too small to find statistically significant differences on the basis of racial background, follow-up interviews revealed that non-white LGBT physicists experienced additional problems because of their race that were not faced by their white colleagues.

The survey comes at a time when one of the world’s most prominent physics institutions — the European particle-physics laboratory, CERN, near Geneva, Switzerland — is in the limelight over the experiences of its LGBT community. Physics World reported in depth on 3 March on the long-running attempts of the lab’s LGBT group to gain official status, as well as about how posters raising awareness about the group had been defaced, torn down and, in one case, adorned with biblical scripture — reports that were later picked up widely by newspapers including the UK's Sunday Times.

Aidan Randle-Conde, a CERN physicist based at the Free University of Brussels who founded CERN's LGBT group in 2010, says that the issue with posters being removed or defaced remains a problem today; around a third of posters are taken down in a typical two week period. Defacing is rarer, he says, happening a few times each year. But CERN authorities – as well as staff – have been supportive, he adds. “People inside and outside of the lab have responded with surprise, dismay, and outrage that a minority of people at the lab can spread their hate and intolerance like this."

Ahead of the media reports, CERN had already taken disciplinary action against the homophobic behaviour and strongly condemned the actions. A spokesman for the laboratory said: “CERN is fully committed to promoting diversity and equality, at all levels. It is one of CERN’s core values as clearly reflected in our Code of Conduct as well as in several organizational policies. Homophobic behaviour at CERN will not be tolerated.”