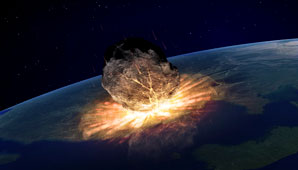 A team of Australian and US scientists, including researchers from Curtin University, collected granite samples from the Santa Fe impact structure in New Mexico, where a meteorite plummeted into Earth more than one billion years ago.

The scientists’ analysis revealed that the sample contained a mix of minerals including tiny grains of a rare mineral called xenotime. These grains contained a pattern of fine fractures, which minerals form when exposed to high pressures, such as the blast of a meteorite impact.

In the same sample, zircon mineral, which shocks at pressures of more than 20 gigapascals, did not contain any fractures. The scientists therefore propose xenotime can reveal clues about which areas were once exposed to lower pressures, including impact sites that are already heavily eroded.