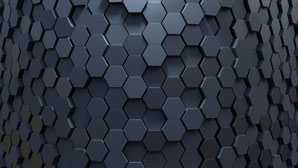 Trapping electrons on a two-dimensional electronic kagome lattice surface could lead to applications in electronics and quantum computing.

Electronic kagome lattices, named after a traditional Japanese woven bamboo pattern composed of interlaced triangles and hexagons, have long been of interest to scientists because of their superconducting and quantum mechanical properties. Creating them, however, has proved challenging.

Now, a team that included researchers from the University of Wollongong in Australia has created an electronic kagome lattice from silicene, a single-atom layer of silicon with a hexagonal honeycomb structure similar to that of graphene.

After twisting the silicene into a kagome lattice, electrons become trapped and circle the hexagons in the structure. Breaking the lattice creates an edge, freeing the electrons, which then move along it with low electrical resistance at very high speeds.