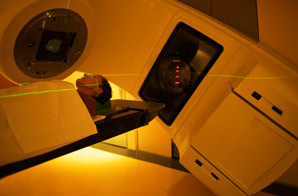 Laser-generated beams of carbon nuclei can be made more useful for cancer therapy by optimizing the thickness of thin films used to create them.

Ion beams are used in radiotherapy to knock out cancer cells in tumours. Carbon ions are particularly attractive for this because their properties are such that they dump most of their energy at the target, leaving surrounding healthy tissue relatively unscathed. However, carbon-ion beams generated by laser irradiation of thin films are often contaminated with protons, since protons are preferentially accelerated.

Now, a team led by researchers from Queen’s University Belfast has demonstrated that it is possible to reverse this tendency by optimizing the thickness of the thin film.

When they did this, carbon ions were accelerated in preference to protons, creating beams that have much higher concentrations of carbon ions.