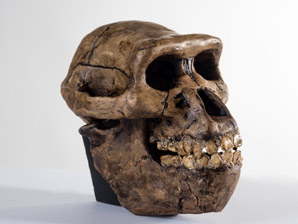 Modern gorillas could well be more intelligent that ancient hominins.

Brain size has usually been used as a measure of intelligence when studying the fossil skulls of human ancestors. That conventional wisdom has now been challenged by a team led by researchers at the University of Adelaide in Australia.

They evaluated intelligence by estimating the rates of blood flow to the brain. The team based this estimate on the sizes of the holes through which the arteries pass at the base of the skull. After calibrating the method in humans and other mammals, they applied it to the skulls of great apes and fossil skulls of Australopithecus, the species that Lucy the hominid belonged to.

This head-to-head comparison indicated that the apes had more blood flow to their brains, suggesting that they have greater intelligence than the hominids despite having smaller brain volumes.