Cultural revolutions reduce complexity in the songs of humpback whales 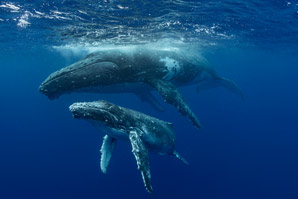 Humpback whale songs become increasingly complex until a cultural revolution brings them back to basics.

The role of complexity of male whale song has been unclear.

Now, a team led by researchers from the University of Queensland has used recording devices fixed to the seafloor and boats to listen in on humpback whales migrating around eastern Australia. They found that male whales in each pod learnt identical song patterns, which grew in complexity over time, possibly due to individuals embellishing the tune to attract females.

But every few years, a revolution occurred and the complex song was replaced with a new, simplified tune. This was often acquired from western Australian humpbacks, suggesting a cultural exchange at shared feeding grounds.

The regular return to simplicity implies that humpbacks can only learn so much new material, but it could also be that new songs are more alluring to females.