Isolation by environment in the highly mobile olive ridley turtle (Lepidochelys olivacea) in the eastern Pacific. 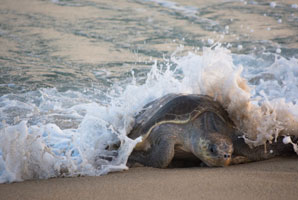 The diversity of an endangered sea turtle may be limited by ocean currents that dictate where the turtles mate and migrate.

Olive ridley turtles (Lepidochelys olivacea) roam freely in the warm tropical waters of the eastern Pacific Ocean. It was thought they mated randomly, free from geographical barriers and physical or social preferences, so should be fairly genetically uniform.

A team led by researchers from Flinders University collected DNA from 634 olive ridley turtles at nesting sites across the eastern Pacific in 2006 and 2010, and assessed whether oceanic variables drove genetic differences in the region. They identified two distinct populations split between Mexico and Central America. The researchers found that the groups have become isolated from each other because seasonal ocean currents prevent the turtles from mixing with the neighbouring population during their migrating and mating season.

"Understanding how marine animals perceive their environment and how this impacts on their movements is essential for addressing human impacts and for informing conservation management", says Flinders University’s Luciano Beheregaray.