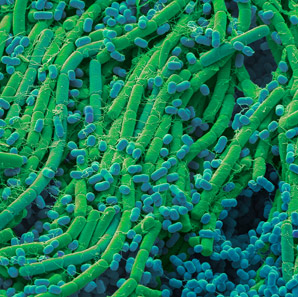 The first bacterium outside of the human gut capable of breaking down the red dye carminic acid has been found.

Carminic acid is produced from the cochineal beetle, and we digest it with the help of gut microbes. Despite carminic acid being used extensively as a food colouring and in cosmetics and drugs, the exact paths by which it is broken down in nature and in the gut have never been determined.

Now, a team led by researchers from the University of Tsukuba in Japan has identified a soil bacterium that can use carminic acid as a source of carbon.

The enzyme that the soil microbe uses is quite different from the one gut bacteria use, although the subsequent metabolic processes are similar. The researchers speculate that the difference in enzymes maybe due to the presence of oxygen in the soil but not in the gut.