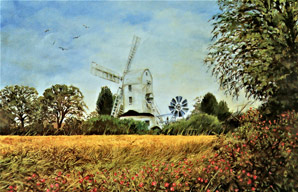 Maths is enabling a deeper dive into the evolution of artistic styles.

Ancient artwork holds clues to past cultures, but even the most astute art historian would struggle to study thousands of paintings to identify stylistic trends across space and time.

Now, a team that included researchers from KAIST in South Korea has created a computer algorithm that can categorize landscape paintings according to whether they are divided into three horizontal sections (such as land, sea and sky), three vertical ones (such as sky between two forests), or a mixture of both.

The team scanned nearly 15,000 digitized landscapes, mainly from the last 500 years of Western art. They found that popularity shifted from mixed scenes to purely horizontal ones around 1850, while the horizon line has gradually descended and ascended over time.

This method could be used to study evolving composition in other two-dimensional images including movies.