Adaptation of plasticity to projected maximum temperatures and across climatically defined bioregions. 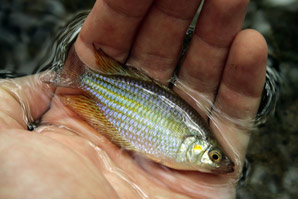 Subtropical rainbowfish turn out to be more resilient to rapid warming than their temperate relatives.

When migration is not an option, adaptation to climate change is thought to be influenced by the temperatures a species evolved in, but precisely which species have evolved resilience is unknown.

Now, a team that included researchers from Flinders University in South Australia has studied heat tolerance and gene expression in three closely related Australian rainbowfish species that evolved separately in desert, temperate and subtropical climates. They observed which genes the fish expressed under present summer temperatures (21 degrees Celsius) or maximum temperatures predicted for 2070 under a high-emissions scenario (33 degrees Celsius).

When things hotted up, subtropical fish activated 109 new genes to increase their tolerance, while the desert and temperate species activated 84 and 27, respectively.

These results suggest that geographic factors should be considered when predicting how species will respond to climate change.