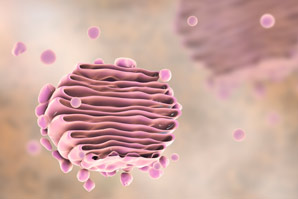 A set of factors important for transporting proteins to the vacuoles of plant cells has been identified.

Vacuoles are important for plant growth, but how proteins are conveyed to plant vacuoles is largely unknown.

A team involving researchers at the Spanish National Research Council used a mutant screen to identify essential genes for the transport of vacuolar cargo. They found 17 mutants in 13 genes required for vacuolar transport, dubbed modified transport to the vacuole (MTV) genes.

Subcellular localization analysis placed most of the MTV proteins at the interface between the trans-Golgi network and multivesicular bodies, supporting the role of these compartments in the sorting of transported proteins.

However, two MTV proteins localized to ER- and microtubule-associated compartments (EMACs), and one of these proteins was shown to interact with the motor domain of kinesins. Together, these findings suggest that EMACs and kinesins play an as yet unknown role in plant vacuolar trafficking.