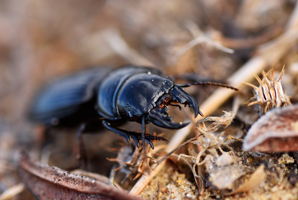 The size of a beetle’s defensive pincer, its mandibles, may be determined epigenetically, that is by external factors that affect the expression of inherited genes.

Certain physical characteristics of an organism can change in response to environmental conditions, such as temperature or food availability. The broad-horned flour beetle (Gnatocerus cornutus) has nutrient-sensitive mandibles, meaning their growth is driven by nutritional conditions during development, but the molecular mechanism behind this is unclear.

A team including researchers from Okayama University in Japan epigenetically modified G. cornutus larvae to inhibit the activity of several histone deacetylases (HDACs), enzymes that control gene expression. They measured the size of 16 body parts once the beetles were fully grown and found that inhibiting HDAC1 curtailed claw growth whereas inhibiting HDAC3 led to mightier mandibles, with little effect on other body parts.