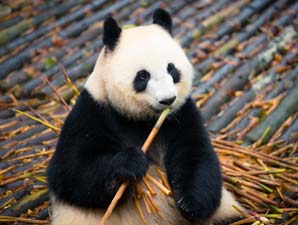 They may seem bumbling at times, but pandas grab bamboo with remarkable finesse — thanks to ‘thumbs’ that let them pick up their meal with ease.

It turns out this false digit, an abnormally large wrist bone, may have evolved in two distantly-related panda species through changes to the same genes, researchers have discovered.

A team of scientists from the University of Chinese Academy of Sciences sequenced the genome of the red panda and compared it to the genome of the giant panda. The researchers found several genes that showed signs of evolutionary change in both species, including genes involved in limb development and digestion.

The scientists propose these genetic changes allowed giant and red pandas to adapt to a new low-nutrient, high-fibre diet as they evolved from carnivorous ancestors. These findings provide rich genetic insights into convergent evolution, the emergence of similar traits in distantly-related species.