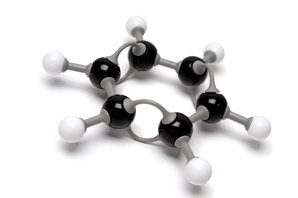 A new way to modulate the properties of materials ranging from liquid crystals to gels could be realized by combining electron-donating and electron-accepting aromatic molecules in alternate solvents.

Various technologies are based on the interaction between electron-donating and electron-accepting aromatic molecules. Low-polarity solvents such as heptane and hexane enhance the strength of this interaction.

Now, three researchers at Kanazawa University in Japan have tested the effect of two highly non-polar solvents, poly(dimethylsiloxane) and oligo(dimethylsiloxane), and shown that the donor–acceptor interaction becomes even stronger in these solvents.

These siloxane solvents could help researchers determine the exact mechanism of aromatic donor–acceptor interactions. Additionally, adjusting the strength of the interaction by changing the solvent could offer a way to fine tune properties such as self-repair and stimuli responsiveness in technologies based on donors and acceptors.