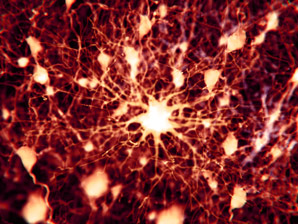 Support cells in the brain can affect goal-directed behaviours by interacting with inhibitory nerve cells, a finding that could lead to new treatments for neurological and psychiatric disorders.

Decision making during goal-directed behaviours involves weighing up the costs and benefits of each option. While various regions of the brain are involved in this assessment, the prefrontal provides critical support. The interplay between inhibitory and excitatory neurons in this region is well documented. But how astrocytes, a type of star-shaped supporting cell in the brain, interact with some of these same neurons was poorly understood.

Now, a mouse study led by scientists at the Spanish National Research Council has shown that receptors on astrocytes can sense neurotransmitters released by inhibitory neurons. The astrocytes, in turn, change the electrical firing properties of nearby excitatory neurons in the medial prefrontal cortex, altering brain waves that affect decision making and associated behaviours.