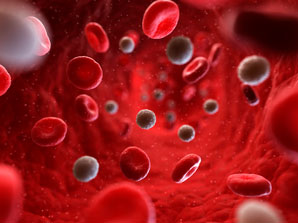 Infections disrupt the expression of a biological switch that determines whether immature blood-forming cells turn into red or white blood cells. This finding could lead to new drugs for treating blood diseases such as anaemia.

A team led by scientists from Tohoku University’s United Centers for Advanced Research and Translational Medicine have identified two regulatory proteins that promote the formation of oxygen-transporting red blood cells over infection-fighting white ones.

They found that exposure to a molecule found on the surface of bacteria leads to diminished levels of these proteins in progenitor blood-forming cells. The reduced activity then helps tip the balance towards the production of the white blood cells needed to fight off pathogens in the body.

But this also results in fewer red blood cells being made, which could explain why anaemia often accompanies infection and inflammation.