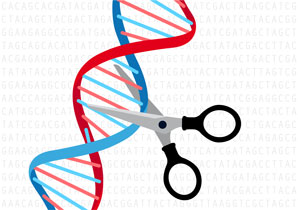 Genome-editing tools known as adenine base editors (ABEs) have a much lower error rate than the much-touted CRISPR–Cas9 gene-editing method, and are thus considered safer for therapeutic applications. But ABEs still cause some unwanted changes to DNA, highlighting the need for technological improvements.

ABEs make a particular conversion between two of the four DNA letters — swapping an adenine for a guanine. Sometimes, however, they alter the genome in undesired ways.

To characterize the off-target activity of ABEs, researchers from the Institute for Basic Science in South Korea adapted a sequencing assay they had previously developed for calculating the accuracy of CRISPR–Cas9. They showed that ABEs make few mistakes — but when they do, the errors are different from those caused by other types of gene-editing tools.

The team concluded that more precision and specificity is needed before ABEs can be safely used to fix disease-causing mutations in people.