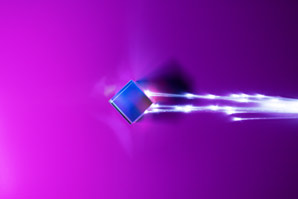 A crystal composed of gold nanoparticles has realized the strongest coupling with light of any material to date. The material could find use in future computers that are based on light.

Usually, light only interacts weakly with matter, so that it doesn’t change the properties of a material.

Now, a team that included two researchers from Hamburg University has succeeded in making a material that interacts so strongly with light that it isn’t possible to treat light as a mere perturbation. Rather, light alters the material’s physical properties. This meant that to understand colour and other physical properties of the crystal, the researchers had to factor in light in their calculations.

Photons passing through the crystal interacted so strongly with electrons that the photons and electrons act as if they were a new particle.