A two-qubit gate between phosphorus donor electrons in silicon 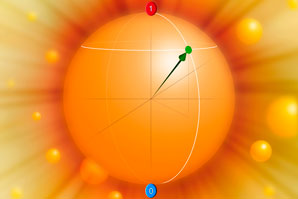 The first two-qubit gate — an essential building block for quantum computers — between two atom qubits has been demonstrated.

Qubits made from single atoms on silicon are very attractive for realizing quantum computers, not least because they can take advantage of conventional silicon fabrication technology.

By using incredibly high precision fabrication techniques, a team of researchers, all at the University of New South Wales in Australia, has realized a two-qubit gate by embedding two phosphorus atoms in silicon a mere 13 nanometers from each other. This gate was 200 times faster than any two-qubit gate made to date.

The team’s next goal is to realize a quantum integrated circuit made up of ten qubits.