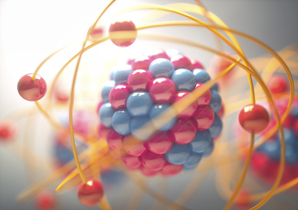 The greater stability of pear-shaped nuclei can partially explain why large atomic nuclei split unevenly into a large and a small daughter nucleus, two nuclear physicists have found.

In nuclear power stations, large atomic nuclei such as uranium break into two smaller nuclei, releasing energy in the process. Interestingly, the two daughter nuclei don’t have similar masses: one is considerably bigger than the other. Physicists have long wanted to understand the factors that determine the relative masses of the daughter nuclei.

Now, a researcher from Tsukuba University in Japan and his collaborator have performed calculations that show that pear-shaped daughter nuclei preferentially form due to the strong repulsion generated by the electrical charge of the two fragments. This finding will help refine models of the nucleus and improve predictions of fission products.