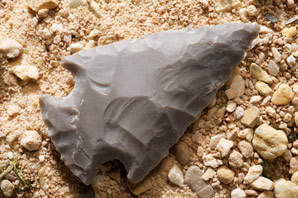 The Levallois technique is a sophisticated method for making a multipurpose stone tool that could spear, slice, scrape and dig. It is thought to have originated in Europe and Africa 300,000 years ago, and probably only reached Asia when modern humans arrived around 40,000 years ago.

Now, a team that included researchers from the University of Wollongong analysed more than 2,200 stone artefacts from Guanyindong Cave in southwest China, and identified 45 pieces that were probably made using the Levallois method. By dating the sediment that had entombed these tools, the team estimated that they were in use between 170,000 and 80,000 years ago.

Archaeologists are yet to find evidence of human migration to the area during this time, suggesting that the people of Asia came up with the special tool-making technique independently.