Optimized arylomycins are a new class of Gram-negative antibiotics 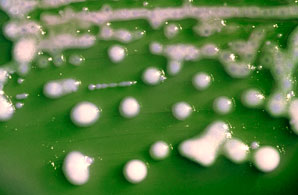 By chemically optimizing an antibiotic naturally produced by soil bacteria, a Genentech-led team has made a molecule that can kill nasty drug-resistant superbugs.

Researchers at the Roche subsidiary started with arylomycin — a natural product that targets the signal peptidase enzyme found on the surface of bacteria but has only weak activity. They then extensively modified the molecule while keeping its core unchanged to produce G0775, a potent agent that works at doses 500 times lower than natural arylomycin to kill a broad spectrum of microbes — including notoriously hard-to-treat ‘Gram-negative’ bacteria.

The drug also protected mice from lethal infections, and bacteria showed a low potential for becoming resistant to it.

Because optimized arylomycins like G0775 work through a unique mechanism of action, the researchers argue that they represent “a much-needed new class” of antibiotics to combat the growing threat of multidrug-resistant pathogens.