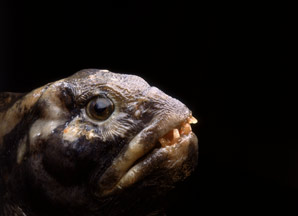 Deep-sea creatures could be more vulnerable to global warming than previously thought.

Temperatures are rising faster at the sea surface than in the darkest depths, suggesting that deep-ocean life will be largely unaffected by climate change.

Now, a team led by researchers from the University of Queensland has used climate models to calculate the speed and direction of temperature changes (climate velocity) at different ocean depths over the last 50 years, and for the rest of this century under different climate-change scenarios.

The team compared their findings to the thermal ranges of 20,000 marine species to assess how they respond to shifts in their comfort zone. Under controlled greenhouse-gas emissions, climate velocity below 4,000 metres could become 5.5 times faster than at the surface by 2100, leaving little time for deep-sea communities to adapt or move.

Limiting deep-sea fishing and mining could be one step towards increasing ecosystem resilience all depths, the researchers say.