Persistent Quaternary climate refugia are hospices for biodiversity in the Anthropocene 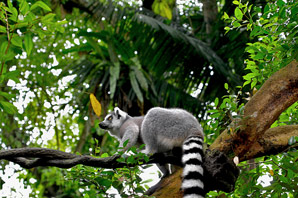 Tropical forests and other biodiversity hotspots will be hit hardest by global warming.

Wildlife is thought to flourish in areas with stable temperatures, since they provide safe havens during periods of rapid environmental change. But whether these refuges can buffer against human-induced climate change is uncertain.

Now, a team led by researchers from the University of Adelaide has mapped regional temperature and rainfall trends on a near-century timescale for the last 21,000 years. When they overlaid this with global biodiversity hotspots, they found that nearly half of the species-rich area was characterized by a combination of stable temperatures and variable rainfall. Droughts and floods encourage diversity by intermittently restricting and expanding suitable habitats.

The team modelled these trends under future greenhouse gas emissions, and found that more than 55% of land and ocean with historically stable temperatures will be in the unstable category by the end of the century.