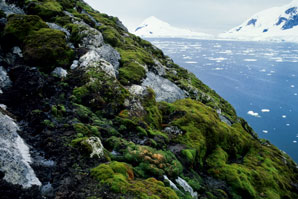 The desert-like expanse of East Antarctica is drying out, according to recent rapid changes in the region’s vegetation.

Global warming trends are barely evident in East Antarctica, despite epic ice loss from neighbouring West Antarctica. However, the region’s plants are experiencing different effects of climate change. A team that included researchers from the University of Wollongong studied how moss communities on the Windmill Islands changed between 2000 and 2013. They noticed a decline in the moisture-loving moss Schistidium antarctici, while two drought-tolerant mosses became more abundant. The team also compared aerial photographs of the region over this period, which showed a browning of vegetation, likely caused by insufficient water.

This heightened sensitivity of Antarctic mosses to changes in their surroundings could make them useful indicators of climate change at ice-free coastal regions.