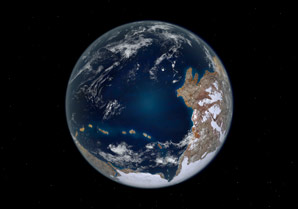 A link has been discovered between the intensity of superplumes — massive plumes of abnormally hot rock welling up from deep within the Earth — and the cyclic formation and breakup of supercontinents on the Earth’s surface.

Superplumes are thought to spring from two gigantic piles of hot rocks located nearly 3,000 kilometers beneath our feet. There has been much debate about how they are related to supercontinents on the Earth’s surface, which repeatedly form and break up in a cycle roughly 500 to 700 million years long.

Three researchers at Curtin University in West Australia have found evidence that superplumes undergo a similar cycle to supercontinent formation, suggesting that the two phenomena are related. They did this by using the abundances of nickel, chromium and iron in more than 40,000 basalt rocks as a ‘finger print’ to trace superplume activity through the eons.