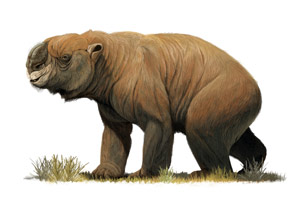 A combination of climate and people drove Australia’s biggest beasts to extinction.

Unearthing the reason why Australia’s ancient megafauna, from massive marsupials to 7-metre-long lizards, became extinct some 42,000 years ago is tricky because fossil data is sparse.

A team that included researchers from Flinders University used fossil records, past climate reconstructions and archaeological data to map megafauna extinctions and the spread of humans around south-eastern Australia over the past 120,000 years.

Using statistical models to look for potential causes, the team found that freshwater sources strongly determined where humans roamed across Australia’s arid lands. These oases would have also attracted megafauna, leading to clashes between humans and animals. In regions with no humans, megafauna extinctions were more closely linked to changes in vegetation.

Although climate change clearly limited many animals’ diet, interactions with humans seemed to have accelerated their demise.