The kynurenine pathway in major depressive disorder, bipolar disorder, and schizophrenia: a meta-analysis of 101 studies 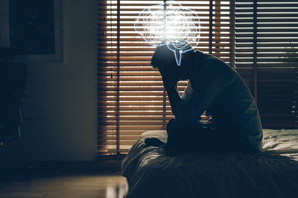 How people with psychiatric disorders breakdown an essential dietary amino acid into neuroactive by-products differs according to the nature of their condition. This finding could inform future therapeutic strategies directed at modulating this metabolic pathway.

A team co-led by Deakin University scientists pooled data from 101 studies that collectively tested the blood of nearly 11,000 people for metabolites involved in the breakdown of tryptophan. An amino acid found in food, tryptophan is used by the brain to make serotonin, the happy hormone, but it also forms of the basis of other compounds produced via the kynurenine pathway.

The researchers found that people with major depressive disorder, bipolar disorder and schizophrenia all showed a shift in tryptophan metabolism from serotonin to the kynurenine pathway. Yet only those with mood disorders (depression and bipolar disorder) also produced more of a neurotoxic metabolite instead of an alternative neuroprotective one.