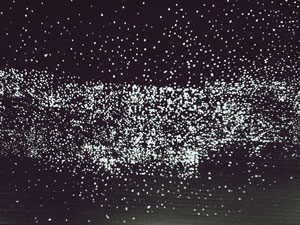 By measuring the speed of tiny particles as they move around liquids and gases, researchers shed light on a phenomenon that could have profound implications for almost every branch of science, according to a study published in Nature Nanotechnology.

An international team of scientists, which included researchers from Nanjing Tech University, used a simple but powerful technique called luminescence spectroscopy to measure the velocities of tiny particles as they move randomly in fluids. Known as Brownian motion, it is one of the most fundamental, but little understood, phenomena in science.

Despite extensive attempts, researchers had previously been unable to measure the velocity of particles as they bounce off each other and the molecules of the fluid in which they are suspended.

However, by exciting nanoparticles in a fluid to higher temperatures, precise temperature mapping of the fluid was possible, and by comparing temperature changes with emissions from the energized particles, the team was able to measure the instantaneous velocity of the nanoparticles.