Opportunities for biodiversity gains under the world’s largest reforestation programme 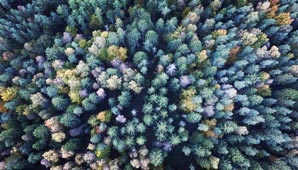 A survey of China’s Grain-For-Green Program (GFGP), which reforests farmland that is vulnerable to erosion, reveals that it is failing to restore biodiversity.

An international team, including researchers at China’s Sichuan University, combined a literature survey, biodiversity estimates in the field, and economic analyses to assess the outcome of the GFGP in the Sichuan province. The GFGP forests were overwhelmingly monocultures, and only a small proportion were mixed forests with up to five tree species; nearly none had as much tree diversity as the native forests the croplands had replaced. The restored forests were home to fewer bee species than the croplands, and while bird diversity in mixed forests was greater than in croplands, it was lower in monocultures.

The researchers recommend that GFGP promote mixed forests over monocultures, which would increase biodiversity without incurring additional costs for GFGP farmers. While converting the croplands back to native forests might incur a small cost, it would significantly increase biodiversity.