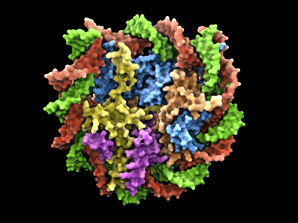 Real-time images showing a DNA molecule wrapping itself around a histone — a critical interaction for storing and retrieving genetic information in a cell — have been captured for the first time.

Strands of DNA are efficiently stored inside our cells by wrapping around disk-shaped protein clusters called histones.

These dynamic structures can partially unwrap and rewrap to allow the genetic information stored on the DNA to be read, regulating gene expression. However, the unwrapping and rewrapping processes aren’t fully understood.

Now, researchers at Kanazawa University in Japan have used high-speed atomic force microscopy to record movies of the DNA–histone interaction in real time.

The movies capture short double-strand DNA touching the histone, before the histone appeared to slide to the end of the strand and the DNA then gradually wrapped itself around the protein.

High-speed atomic force microscopy could be a useful tool for studying DNA–histone interactions, the researchers concluded.