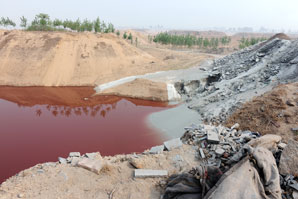 Much of the mercury in soils today was deposited by human activities, such as mining and burning fossil fuels. But the processes driving mercury transfer between land, water and air are poorly understood.

A team including researchers from Peking University analysed soil erosion data and mercury measurements across China and found that rainfall-induced erosion, which in some regions was enhanced by deforestation, flushes vast quantities of mercury from the soil. The amount of mercury unleashed nearly doubled between 1990 and 2010 to reach 420 tonnes, with some 300 tonnes flowing into streams. This is problematic as mercury becomes extremely toxic to humans and animals when it reacts with bacteria in soil or water.

A better understanding of how past and present human activities affect the mercury cycle will help guide efforts to reduce mercury pollution.