Central Processing of Itch in the Midbrain Reward Center. 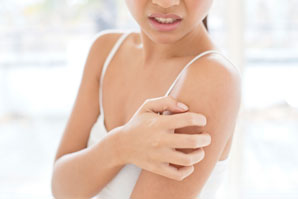 Two neighbouring groups of neurons located at the centre of the brain control seemingly opposing aspects of the vicious itch–scratch cycle, a team co-led by scientists at ShanghaiTech University has shown in mice.

One group of neurons produces the neurotransmitter GABA. These neurons modulate avoidance responses to itch-associated stimuli and the desire to initiate scratching behaviours. The other neurons synthesize the neurotransmitter dopamine and sustain scratching episodes by bringing about good feelings in the brain’s reward centre.

Both sets of neurons are in a part of the midbrain known as the ventral tegmental area.

The findings — revealed through optogenetic studies in mice — demonstrate a central brain circuit for processing the aversive and pleasurable aspects of compulsive scratching. If the circuit is the same in people, it could be targeted with drugs to help treat chronic itch-related diseases.