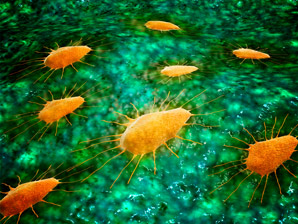 Blocking the clearance of dying tumour cells can help bolster the cancer-killing response of the immune system.

That’s according to a mouse study by scientists at the Roche subsidiary Genentech. They generated an antibody drug directed against MerTK, a protein found on the surface of cell-devouring immune cells called macrophages.

Macrophages normally use MerTK to detect and remove dying cells before they release cellular contents can stimulate inflammation. Timely removal of these ailing cells prevents inflammation and contributes to the immune tolerance of tumours.

But the MerTK-targeted antibody gums up this process. With the dying cells left in place, cell-free DNA spills into the tumour microenvironment, which leads to an enhanced adaptive immune response.