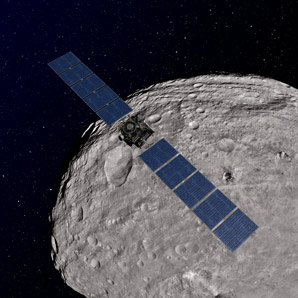 The second largest asteroid in the Solar System, 4 Vesta, had a surprisingly long and tumultuous beginning.

Observations by NASA’s Dawn space probe in 2011 hinted that 4 Vesta had a complex geological past that could shed light on the formation of planets with a core, mantle and crust.

Now, five researchers, all from Curtin University in Western Australia, have analysed the ages and chemical compositions of seven meteorites found in Antarctica. These meteorites were likely knocked from Vesta’s crust 3.5 billion years ago.

The team investigated the thermal histories of the meteorites and found evidence that extensive volcanic activity at Vesta’s surface that lasted for 30 million years after its birth — far longer than expected for a relatively small object.

Such prolonged volcanism may have been sustained by a slowly cooling magma ocean encased by a crust that was being repeatedly bombarded by other asteroids.