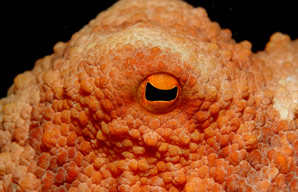 The size and structure of the octopus brain varies according to the habits and habitats of octopus.

Octopus have one of the largest brains of invertebrates, with some species having more than half a billion neurons — more than 7 times as many as a lab mouse. But most research to date on the octopus brain has focused on just one species that is mainly nocturnal.

To get a more rounded picture of the octopus brain, three researchers at the University of Queensland in Australia have used magnetic resonance imaging (MRI) to examine the brains of four octopus species: a deep-sea species, a solitary nocturnal species and two reef species that are active during the day.

The trio found that the size, folding and division of the octopus brain differ according to where the octopus live and their habits. In particular, the diurnal and nocturnal octopus exhibited differences in their brain structures associated with vision.