Monovision and the Misperception of Motion 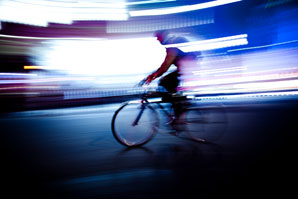 Drivers using monovision to treat presbyopia — the inability to focus on near objects that often develops with age — could be putting other road users at risk.

Monovision is the contact lens equivalent of bifocal glasses. Different prescription lenses provide near vision to one eye and far vision to the other, resulting in one image being more blurred than the other.

A team that included researchers from the Spanish National Research Council used a computer animation to test motion perception among monovision users.

They found that millisecond differences in the processing speeds of the blurry and clear images alter the viewer’s depth perception of moving objects. The researchers calculated that a cyclist moving at about 24 kilometres per hour could appear almost 3 metres further away than they really were.

As presbyopia proliferates in the ageing population, eliminating such optical illusions will be essential to prevent traffic accidents caused by drivers breaking too slowly.