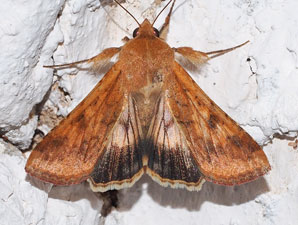 With its pale forewings and darker brown hindwings, the cotton bollworm moth, Helicoverpa armigera, looks pretty ordinary — but its reproductive mechanisms are anything but.

Females attract mates through a combination of two pheromones, but now a team led by researchers at the Chinese Academy of Agricultural Sciences has identified a third pheromone in this chemical concoction that actually puts males off.

Only younger, less sexually mature females release this odorous repellent. This usually prompts males to ignore less fecund youngsters in favour of older females with greater reproductive capacity. Yet the researchers showed that they could abolish such behaviour by selectively mutating the gene that codes for the responding olfactory receptor in males.

The finding, reported in Current Biology, has implications beyond the moth bedroom. It now sets the stage for manipulating these pheromone signals to disrupt mating and control the population of this agriculturally destructive pest.