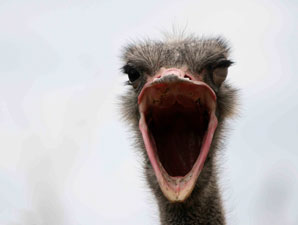 The southerly stomping grounds of ostriches and emus may have been first the landing post of a small bird that flew in from North America.

Flightless birds, or ratites, are thought to have originated on Gondwana, the supercontinent that broke up into the land masses of the Southern Hemisphere. An international team, including a researcher from The Kyushu University Museum, have established an evolutionary tree of the ratites using DNA fragments from a fossil, found in Madagascar, of the extinct elephant bird, a giant ratite. They found physical and genetic similarities between the elephant bird and a much smaller bird species, Lithornis, whose fossils, found in North America and Europe, predate those of the monstrous elephant bird.

The evolutionary tree places Lithornis as a common ancestor of ratites. It had functional wings so could have flown overseas from the North to the Southern Hemisphere where it eventually evolved into ostriches and emus, the authors suggest.