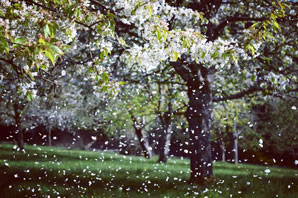 Molecular and genetic analyses have revealed that a supporting ‘brace’ of lignin is needed for leaves and flowers to properly detach from plants. Following separation, the exposed cells are covered by a protective layer to prevent infection.

Researchers at Korea’s Institute for Basic Sciences studied how plant cell walls break down when flowers detach. They discovered that detachment involves two genetically distinct cell types: residuum cells, which stay in the stem, and secession cells in the detaching organ.

During separation, secession cells are surrounded by a molecular brace of lignin, which holds them in a cluster and limits the diffusion of cell-wall-degrading enzymes to precisely control the location of separation. Meanwhile, residuum cells transform into epidermal cells and develop a coating to protect against pathogens, a process that was thought to be restricted to embryonic development.

Understanding the mechanism of organ separation will facilitate its manipulation in crop breeding.