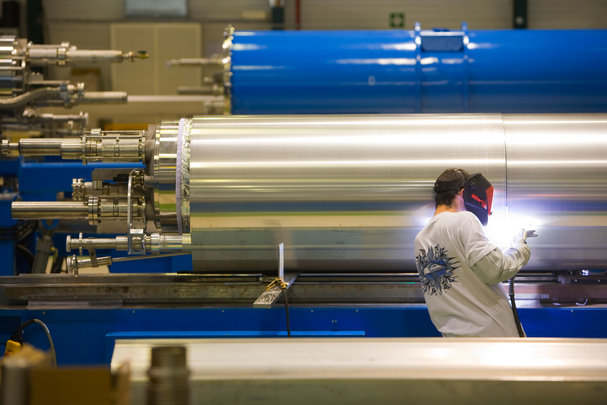 A CERN employee works on a magnet tube for the Large Hadron Collider.

Collaborations involving 10 or more principal institutions in high-energy physics are driving the growth of so-called megapapers – those with more than 1,000 authors.

The institutions below were those which ranked highest in the Nature Index for physics and astronomy papers involve 10 or more institutions for the period 2015-2018.

Italy’s National Institute for Nuclear Physics topped the rankings with a Share of 44.59 - nearly double that of the Helmoltz Association of German Research Centres, which took second place with a Share of 24.95.

An institution’s Share is a fractional count allocated for an article the share of its total authorship contributed by authors affiliated with the institution. It was formerly referred to in the Nature Index as Fractional Count (FC). For calculation of Share, all authors are considered to have contributed equally.

View the 2019 Collaboration and Big Science Top 200 institutions with high affiliation articles in physics and astronomy.

Founded in 1951, the INFN’s early mission was to continue in the tradition of Nobel Prize-winning Italian physicist, Enrico Fermi, creator of the world's first nuclear reactor. Its researchers went on to design and build the first Italian accelerator, an electron synchrotron, and more recently have helped to inform the construction and use of the CERN accelerators in Geneva.

In 2018, INFN researchers made the first observation of neutrinos and photons emitted from the same cosmic source, which could explain one of the biggest unresolved mysteries in astrophysics, the origin of ultra-high energy cosmic rays.

With 19 research centres throughout Germany, the Helmholtz Association of German Research Centres is the country’s largest scientific organization.

A large proportion of the institution’s high-quality research is in the physical sciences, with papers in the field accounting for more than 30% of its output in 2018.

Last year, Helmholtz researchers were part of an international team that designed a new type of qubit, a unit of information in quantum computing. The new device uses superconducting nanowires that transmit information without breaks.

The findings, published in Nature Physics in April, are an important step towards a universal quantum standard for the electric current.

The European Organization for Nuclear Research (CERN) is home to the largest physics laboratory in the world. Located on the Swiss-Franco border just outside of Geneva, CERN houses more than 12,200 scientists from institutions in over 70 countries.

The Swiss institution is the third biggest contributor to big science articles in physics and astronomy in the Nature Index.

In 2018, its Large Hadron Collider, launched 11 years ago to become the world’s largest and most powerful particle accelerator, produced more than twice as much proton-proton collision data than it did during its first three years in operation.

Named after the Nobel prize-winning creator of quantum theory, the Max Planck Society's strength in physical sciences began in the first half of last century. It has held second position in Nature Index’s overall top ten for the physical sciences for three years running.

The German powerhouse is an international team player, with foreign institutions accounting for more than 70% of its research partnerships. The Max Planck-Princeton Research Center for Plasma Physics facilitates collaboration between physicists in Germany and the United States. Founded in 2012, the group seeks to answer questions in magnetic reconnection, energetic particles, and plasma turbulence.

In 2018, Max Planck researchers were part of a large global team that observed the formation of a neutron star binary system for the first time. The Science paper was covered by more than 30 news outlets.

The world’s largest research organization, the Chinese Academy of Sciences (CAS) is not just 5th among institutions on high affiliation papers in physics and astronomy, but has also maintained its place as the number one producer of high-quality research in the Nature Index ranking for physical sciences overall.

The institute has a team of more than 2,000 researchers — 10 times of that of some other universities with leading physical sciences research, such as the University of California, Berkeley.

In the Nature Index 2019 Annual Tables, CAS also topped the categories of chemistry, Earth and environmental sciences, and government institutions.

Headquartered in Moscow, the National Research Center Kurchatov Institute (NCKRI) was founded in 1943 to house the development of nuclear weapons. Today, its researchers focus on nuclear science, from nuclear medicine to plasma physics.

A global team player in the physical sciences, NRCKI partners with institutions such as CERN in Switzerland and the European Synchrotron Radiation Facility in France. Collaborations with foreign institutions account for more than 90% of NRCKI’s research partnerships.

In June 2019, NCKRI researchers co-authored a paper in Physical Review Letters revealing the structure of pentaquarks, a subatomic particle composed of four quarks and one antiquark. The paper is the institution’s most talked-about article of this year, according to an Altmetric analysis, and has reached almost 300,000 people on Twitter.

One of the founding departments at Stanford University, the physical sciences quickly became one of the university’s strongest disciplines, thanks largely to the arrival of its first professor of theoretical physics, Felix Bloch, in 1934. Bloch would go on to make transformative discoveries in electron transport, ferromagnetism and nuclear magnetic resonance.

The Stanford Linear Accelerator Center's (SLAC) particle accelerator, running since 1967, now houses the world’s most powerful X-ray free-electron laser. More than 2,700 scientists from around the world use the lab’s facilities each year, and more than 700 scientific papers are published annually based on research at SLAC.

Notable physics alumni include Sally Ride, the first American woman in space, and Richard Taylor, among the recipients of the 1990 Nobel Prize for the discovery of quarks.

8. The University of Tokyo (UTokyo), Japan

The University of Tokyo's Department of Physics is one of the world’s largest. New materials science, condensed-matter theory, physics in extreme conditions, and advanced spectroscopy are among its specialist areas.

Its physicists have made notable contributions to fundamental understanding of neutrinos and semiconductor materials, and in 2015 contributed to the discovery of the composition of the giant, subterranean ocean on Saturn’s moon, Enceladus.

In 2017, the university's physicists were involved in recording the first observation of light being scattered by light at the ATLAS experiment at CERN (the European Organization for Nuclear Research). Published in Nature Physics, the work revealed new insights into the properties of matter.

Named after Italian-American physicist, Enrico Fermi, who invented the world’s first nuclear reactor, the Fermi National Accelerator Laboratory (Fermilab) has built an impressive track record since its founding in 1967.

Among Fermilab’s most notable discoveries is the detection of bottom and top quarks and the first direct observation of the tau neutrino. The Illinois-based institution is home to more than 4,000 researchers from more than 50 countries.

In a 2019 paper published in The Astrophysical Journal Letters, Fermilab researchers and an international team detected the shadow of a supermassive black hole at the centre of the Messier 87 galaxy. The article attracted the attention of more than 1,000 Twitter users and 54 online news outlets.

Share: 8.77 Founded in Saint Petersburg on the order of Peter the Great and by Decree of the Senate in the 18th century, the Russian Academy of Sciences quickly became a powerhouse of scientific research and publication.

In 2018, the Russian Government allocated 170 billion roubles (approximately US$2.7 billion) for fundamental research and development, a 25% rise over 2017’s basic science budget.

Between 2006 and 2016, the number of scientific papers produced in Russia more than doubled, and the country is now ranked 18th in the world in high-quality research output, as tracked by the Nature Index.