These organizations are the most prolific in high-quality research. 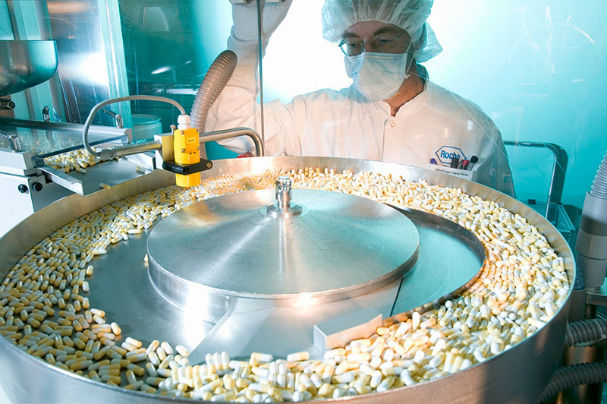 Blister-packing line at the packaging facility in Kaiseraugst: a vibratory conveyer feeds product into the line.

F. Hoffmann-La Roche AG maintains its lead in the corporate sector as the most prolific publisher of high-quality research in the natural sciences. It’s been the number one institute in the Nature Index corporate sector table since 2016; In 2015, IBM held the top slot.

A global pioneer in pharmaceuticals and diagnostics, F. Hoffmann-La Roche AG is one of the world’s largest biotech companies, which for more than a century has developed treatments for oncology, immunology, infectious diseases, ophthalmology and diseases of the central nervous system .

Thirty medicines developed by the company are included in the World Health Organization Model Lists of Essential Medicines, including antibiotics, antimalarials and cancer medicines.

With headquarters in Basel, Switzerland, it is active in more than 100 countries and in 2017 employed roughly 94,000 people worldwide.

Of the 22,747 staff working in R&D, many are working directly with the almost 300,000 patients who are currently enrolled in more than 2,100 clinical trials around the world.

The company has estimated that it takes, on average, 7,000,874 hours of work, 6,587 experiments and 423 researchers to get a single drug from molecule discovery to market.

With about 3,000 in-house scientists working in 12 labs around the world, including in the US, Japan, China, India, Brazil, Australia, Israel, Kenya, Ireland and Switzerland, IBM’s research spans both fundamental research and future tech, ranging from artificial intelligence, blockchain and supercomputers, to wearable devices for Parkinson’s patients.

Founded more than a century ago in New York, the company has produced six Nobel laureates, including Nobel Prizes in Physics in 1986 and 1987 for the invention of the scanning tunnelling microscope and the discovery of superconductivity in ceramic materials.

Watson, the natural-language processing computer system known for defeating human champions on the quiz show Jeopardy! in 2011, is now being applied to oncology, with the aim of personalising treatments.

A Swiss multinational specialising in pharmaceuticals and innovative medicines, Novartis was formed just 23 years ago, with the merger of former chemicals company, Ciba-Geigy, and Sandoz, which now runs its generic pharmaceuticals and biosimilars division.

With products available in 155 countries, and more than 200 projects in clinical development, among the company’s target diseases are cancer, Alzheimer’s disease and malaria.

As the company pursues new insights into disease biology and treatments, “we welcome the insights of researchers both collaboratively and critically in review of our research through publications,” says Jay Bradner, president of the Novartis Institutes for BioMedical Research.

Established 128 years ago, Merck & Co. is an American multinational pharmaceutical company which operates in more than 140 countries.

With revenue of US$42.3 billion (2018) and products spanning pharmaceuticals, vaccines, and animal health , it targets such diseases as cancer, HIV, cardio-metabolic disease, and Alzheimer’s, as well as emerging global pandemics, such as Ebola.

Known as Merck in the US and Canada, and MSD everywhere else , the company has 20 projects in Phase 3 development, including drugs for breast, cervical and ovarian cancer; heart failure, and bacterial pneumonia.

Also in the pipeline are treatments for schizophrenia, diabetes and a vaccine for cytomegalovirus, an often symptom-free disease affecting 40% of people by adulthood, which could potentially be harmful in immune-compromised patients.

In 2015, the company spent $9.5 billion to acquire Massachusetts–based Cubist Pharmaceuticals, which specialises in development of new antibiotics to fight antibiotic-resistant infection.

Headquartered in Cambridge, UK, multinational pharmaceutical and biopharmaceutical giant, AstraZeneca plc, was founded in 1999 through the merger of Swedish company Astra AB and British company Zeneca.

Specialising in small molecules and biologics drugs, as well as medical devices, immunotherapy and personalised medicine, it counts 161 projects currently in the pipeline, and 10 new molecular entities in late-stage development.

Among these are treatments for various types of cancer, as well as type-2 diabetes, severe asthma, and irritable bowel syndrome. Its facilities include one of the world’s only cryo-electron microscopes for studying complex proteins at a tenth of a millionth of a millimetre in scale, and an advanced drug discovery robot called NiCoLA-B.

In 2016, it announced a goal to sequence two million genomes, partnering with organisations such as the Wellcome Trust Sanger Institute and Human Longevity, a company founded by genomics pioneer, Craig Venter.

The plan includes analysing the sequences of up to 500,000 participants from AstraZeneca clinical trials and data from large population cohorts, including the roughly 500,000 UK Biobank participants.

The top 10 Asia Pacific countries in science for 2018