The world's richest people by degrees

Yes, some of them studied science. 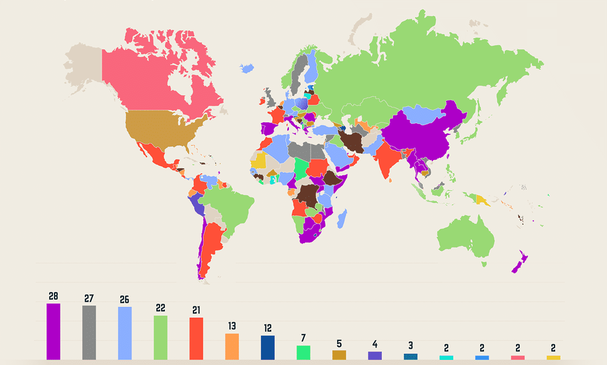 This map reveals which undergraduate degree was completed by the wealthiest person in each country. The colours represent degree type and the bar graph shows how many of the world's richest people completed that degree.

A college education is often seen as the ticket to higher earnings, but which undergraduate degrees did the world’s richest people complete?

As this map by Resume.io, a resume template creator based in the Netherlands, shows, the mega-rich have a diverse education.

The news is not great for science – just seven of the wealthiest people from each country did science as their undergraduate major. But then again, how many people study science for the money?

The most common degrees held by the world’s richest people per country are business and finance, economics, and engineering, while around one-quarter dropped out of their studies or skipped a university education altogether.

To map the undergraduate degree of the wealthiest person in each country, Resume.io teamed up with UK-based NeoMam Studios.

Africa had the highest number of science graduates at the top of the wealth ranks in their countries, including Benin president Patrice Talon (US$400 million), Chad president Idriss Déby ($50 million), and Liberian business tycoon Benoni Urey (US$32 million).

In this analysis the world’s richest science degree holder is Myron W. Wentz (US$1.3 billion), the wealthiest person in Saint Kitts and Nevis.

Wentz, who obtained an undergraduate degree in biology from North Central College in Illinois, is the founder and CEO of nutritional and dietary supplement manufacturer, USANA Health Sciences.

Next on the science list is Albanian entrepreneur Samir Mane (US$1.2 billion), who owns private investment firm Balfin Group.

Mane quit his geology degree at the University of Tirana during his first year, later telling the Financial Times that “basically I learned German there”. But Mane’s language skills would prove handy down the track when building his business exporting cheap TVs and VCRs from Austria to his home country, Albania.

Of course, there may be many science graduate billionaires who don’t appear in this analysis because they are not the single richest person in their country.