Barcelona lures scientists while Madrid is bound by bureaucracy. 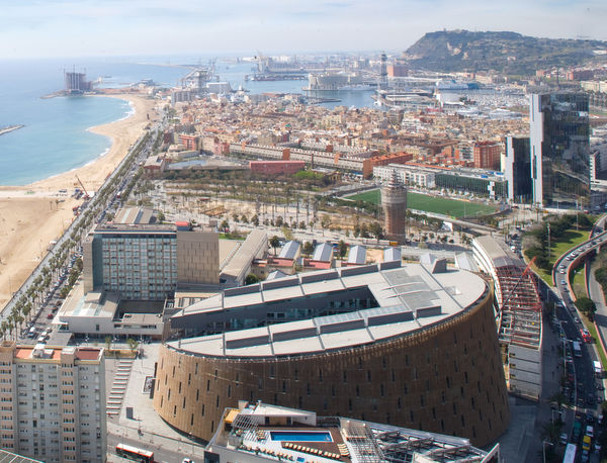 Barcelona's strength has been underpinned by innovative new research centres, such as the Barcelona Biomedical Research Park (PRBB).

In 2008, Barcelona replaced Madrid as Spain's most scientifically productive city. A decade on, the Catalonian metropolis is barely holding on to its lead as the capital struggles to recover from a financial slump that has left a substantial number of public research institutes on the brink of collapse.

Some scientists are concerned that the Catalan government's controversial referendum on independence from Spain could further erode Barcelona's advantage. The referendum was held on 1 October, despite being declared illegal by the Spanish courts.

In 2015, roughly 39.2% of Spain's research articles published in the Scopus database were produced by scientists in Barcelona, compared to 36.6% authored in Madrid. Barcelona remains slightly ahead despite having a little over half as many Spanish National Research Council (CSIC) centres as Madrid, and close to 2,000 fewer researchers.

The two cities face a tighter race to the top when it comes to the production of high-quality research tracked by the Nature Index. Since 2012, the two cities have been neck-and-neck, with a weighted fractional count (WFC), a measure of their contribution to paper authorship, hovering around 250. (Overall, Spain's WFC has declined from 1,191 in 2012 to 1,074 in 2016, with a slight increase in the past year.)

The key to Barcelona's success lies in a well-known formula, says Jaume Bertranpetit, at Pompeu Fabra University in Barcelona: “Attract as many first-class scientists as you can, make them feel comfortable, and let them do their job.”

In the early 2000s, economist Andreu Mas-Colell, head of universities, research and information society for the Catalan government, devised a programme that would offer tenured positions to senior researchers from anywhere in the world. The Catalan Institution for Research and Advanced Studies (ICREA) was established in 2001 and now supports close to 260 professors — half of whom were working abroad at the time of hiring.

In 2008, Catalonia's political parties signed a pact, with regional universities and trade unions, pledging to make the region a centre of research and innovation. Long-term support for ICREA was a key element of this agreement.

In 2016, each ICREA researcher brought in almost €300,000 (US$360,000), quadrupling the amount invested in them by the institution. Indeed, almost half of the European Research Council grants to Spanish scientists over the past decade have gone to Catalonia, close to 50% of which were awarded to ICREA researchers. According to Thomson Reuters, four of the world's most cited researchers in 2016, who have published many papers in the journals included in the index on topics ranging from quantum systems to autoimmune disorders, are among the scientists supported by the high-profile programme. The regional government recently set up a similar programme to recruit 500 new faculty members by 2020, specifically in public universities.

Another factor driving Barcelona's research performance has been the new research centres created by the Catalan government over the past decade, which operate under different working rules than most Spanish institutions. Whereas CSIC faculty are lifetime civil servants, hired through a sclerotic government application process, the recently established Research Centres of Catalonia (CERCA) have the freedom to create their own faculty positions that are subject to regular evaluation. The flexibility these centres offer in recruiting and paying staff salaries, as well as the administrative and funding support for setting up new labs, has appealed to international researchers.

Only a third of the group leaders at one of the CERCA centres, ICFO (The Institute of Photonic Sciences), are Spanish, which is a higher international share than in the CSIC centres. “They have all been hired for their scientific excellence,” says physicist, Javier García de Abajo, an ICREA researcher at the institute, who recently published a paper in Physical Review Letters predicting a new type of physical force acting on nanostructures. The Barcelona Institute of Science and Technology, a multidisciplinary alliance of research centres within CERCA, ranked second in Spain in the Nature Index for 2016, after CSIC.

City-level contribution to the share of authorship in the Nature Index, measured by the share of weighted fractional count (WFC) for that year, compared to Spain’s share.

Researchers in Barcelona and Madrid contribute the most to physical sciences and chemistry papers in the Nature Index.

Spain’s largest scientific organization, the National Research Council (CSIC), contributed to a smaller share of the authorship of papers included in the Nature Index in 2016 compared to 2012. The decrease, measured by weighted fractional count (WFC), is only slightly more pronounced in Madrid than in Barcelona.

In Madrid at the centre of the country, the high density of CSIC centres that once contributed to the capital's scientific prominence has led to its relative decline.

Severe cuts to science funding following the catastrophic global financial crisis of 2008 have starved the public research system. Between 2009 and 2013, the federal government slashed funding for CSIC by 32%. Following a brief reprieve, CSIC's budget saw a further cut of 0.9% in 2017. The council has made thousands of employees redundant, and could see more losses as many of its scientists reach retirement age. “Only two of our group leaders are under 45,” says Peter Klatt, a biochemist at the National Centre for Biotechnology, a CSIC institute in Madrid.

The talent drain from CSIC and established universities in Madrid has been largely buffered by the emergence of younger public institutions similar to those cropping up in Barcelona, which are less hampered by the government's rigid employment rules.

A third of the graduates and post-doctorates at the Spanish National Cancer Research Centre (CNIO), for example, are not Spanish nationals. According to the centre director, Maria Blasco, in the past five years, the centre has tripled its yearly income from royalties through its integrated drug-discovery programme and numerous agreements with big pharmaceutical companies.

In 2007, the Madrid regional government established the Madrid Institute of Advanced Studies (IMDEA), a group of seven institutes focusing on specific research areas, from water to food to nanoscience.

About 45% of IMDEA's budget comes from competitive grants — 60% of which are international — and the institutes have landed 12 European Research Council grants since their creation. While still small, IMDEA's WFC in the index more than doubled between 2012 and 2016, from 4.8 to 12.6.

But, he says, a recent plan for research in Madrid — the first in eight years — will help to reverse the situation by increasing funding for science by as much as 50%, and introducing new types of contracts for young researchers and academic–industry collaborative projects.

Catalonia's referendum on independence from Spain has introduced another element of uncertainty to the city-level rivalry. Some researchers in Madrid and Barcelona admit, although not publicly, that the scientific environment has been strained by the prospect of a unilateral declaration of independence by the Catalan government.

If it were to become an independent country, it is not clear whether it will belong to the European Union, and have the right to apply for grants with the European Research Council or under the larger Horizon 2020 programme. Other scientists argue that, on the contrary, the referendum will not thwart science in Catalonia precisely because it has become so international.